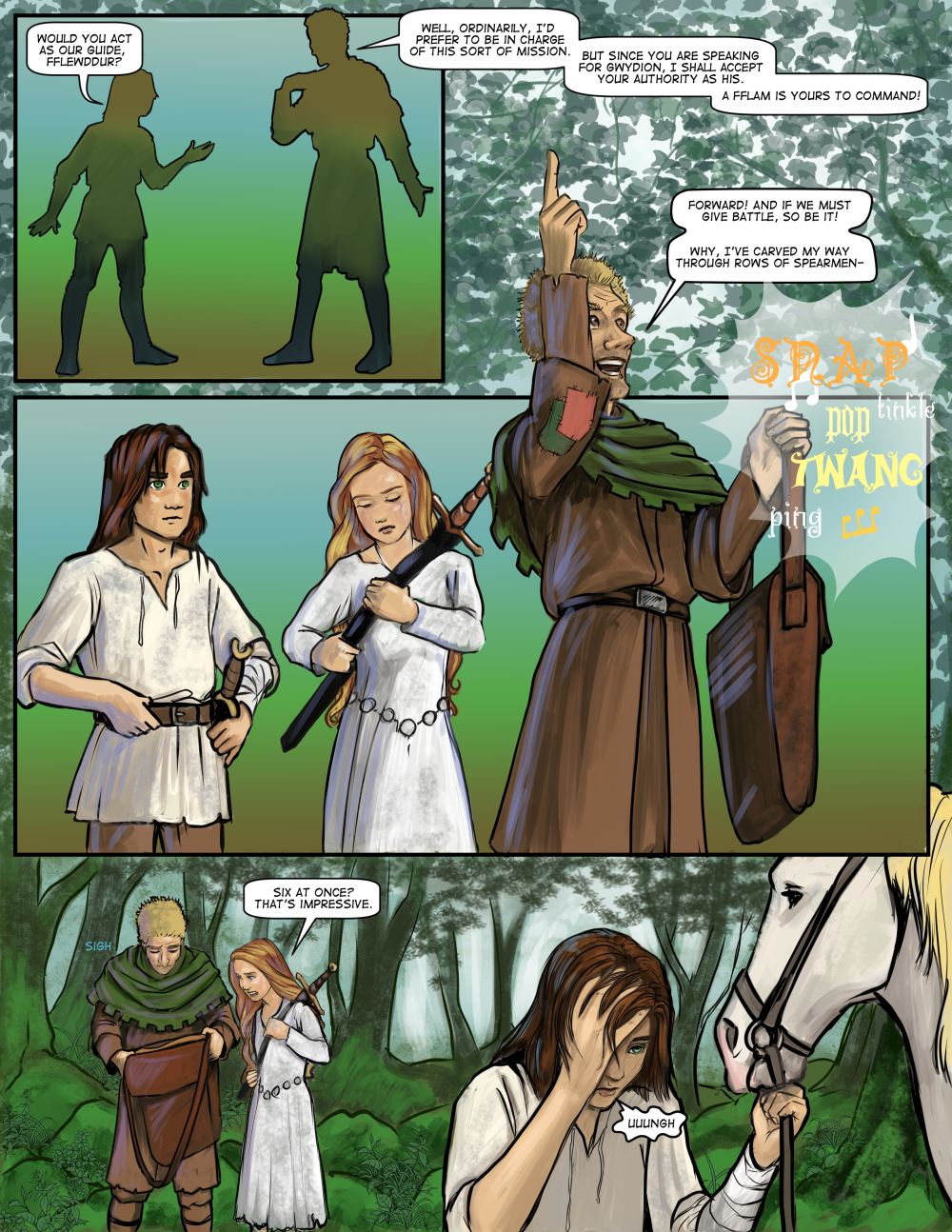 I love the first panel exchange, how Alexander in one brief conversation establishes Fflewddur, despite the very comical aspects of his character, as the adult voice of maturity and humility within this group. Being willing to make himself a subordinate to Taran is a huge concession for someone in his position, and I never even thought about it until my own adulthood. He's really the perfect counterpoint to the adolescent drama between Taran and Eilonwy, and he does it without being preachy or pulling rank. I love him. <3

Ha, I love Eilonwy's comment as she looks at Fflewddur's harp. Not canon, but a perfect moment between her and the bard. There would have been all sorts of little interactions between the group that Alexander couldn't have fit in. Meanwhile, Taran is crushed. A serious mission to accomplish, and he is more convinced than ever that he is surrounded by crazy people.

I live for those little extras. It's so much fun to bring out character interactions and mannerisms. It's like visual fanfic.

I agree with what you say. When I first read this as a kid, Fflewddur was far from my favorite character, but on this long overdue re-read (that I literally just finished) I came to appreciate him a lot more.

I always liked Fflewddur, but it was when I began including him in my fanfic that I really got my head and heart around him and realized what a gem he is. After T and E he is definitely my favorite character.

Ha, yeah. I don't think that I grasped or appreciated the nuances of FF's character or his importance to the other characters back when I first read the book. Also, at the time I think that like Taran, I was pissed that it was FF outside of Spiral Castle rather than Gwydion (being of similar age and personality to Taran at the time, I too thought Gwydion was awesome) and held it against FF ever since, lol. As an adult I fully appreciate FF's role in the story like his character a lot. Really though, there are so many great characters in these books--it's part of what make them great.

I loved him when I read these as a child: "silly man with funny harp!" But rereading it earlier this year, his actions in book five nearly had me barely holding myself together on the DC metro.

I cry at the burning now, when I didn’t as a teen. I think the gravitas of such moments become stronger as we age, experience loss, understand the depth of sacrifice. It’s an incredibly moving scene.

Awww... Eilonwy looks so beautiful in that second panel... <3

Taran is probably thinking 'my most sane companion is this horse'

I laughed when so many of the strings on the harp broke! My first thought was that he was going to have to restring the whole thing. :D

There was a lot of interesting commentary throughout this chapter. Maybe it's because I haven't read the books and I have no preconceived notions about how things should be or where things are heading, but I've thought in both this chapter and the one before it that everyone is much harder on Taran than Eilonwy. I feel that they both throw out the insults and a lot of the time, Taran's come after she's given it to him pretty good. There's a page early in this chapter where she refers to him as "assistant pig keeper" twice before he finally tells her she should be carrying a doll instead of a sword, and I thought she had it coming by that point.

I find it interesting to read through the comments to see just how other people view these pages and how they see things the same or differently than how I am seeing the story. By the time I immerse myself in your artwork and then read through and think about the comments, it takes me a long time to get through a chapter. I spent over two hours on these 11 pages tonight!

Holy cow, if you're reading comments too...yeah this is quite the undertaking. I'm genuinely heartwarmed. Just be aware you're going to be spoiled on quite a number of plot details.

I think your perception of people being hard on Taran might be due to most commenters knowing more about who he becomes later and what it takes for him to get there. As the plot progresses, you'll also see people acknowledging his noble moments; he's the kind of hero who is constantly doing the wrong thing for all the right reasons, and we love him for it. But there's definitely an arc here. In the span of two chapters, toward Eilonwy alone he's been sacrificially heroic (saving her from the collapsing castle), impulsively cruel (accusing her of lying and betraying him), insufferably dense/sexist ("we can't be burdened" by the girl who just rescued us from certain death), and remarkably gracious (ignoring most of her insults, presumably out of whatever chivalrous notions he's been taught and also because he's a genuinely good soul). He has not been at his best emotionally, has undergone a lot of trauma, and still manages to pull it together and do what he thinks is his duty. He's a good kid, no question, and if you are sympathetic toward his trials at this point, then I did my job. ;)

In those same chapters, by contrast, Eilonwy has consistently been something of a shrew toward him. In her defense, her worst moments are usually in reaction to his. Her best moments give you glimmers of what's actually going on deep down - a mix of vulnerability and confusion due to having no idea how to relate to decent people. As the book progresses, this also changes, and she gets her own arc - though it's understated compared to Taran's and the tendency to be acerbic never completely goes away. She's the archetypal plucky girl in these types of stories, along the same lines as Princess Leia or Hermione Granger - often smarter or at least more practical than the guys but frequently having her contributions under-appreciated because, ya know, nobody likes a mouthy girl - except when they do because it's kind of a turn-on, and let me just leave that lying before I go off on a rant about female portrayal in media, lol. It's become such a Thing that it's a trope of its own now, but when Lloyd was writing in the 60s, this was a very innovative and progressive treatment of a heroine.

Speaking of Lloyd, you may find that when you read the actual book, she's toned down somewhat from my version - I excise a lot of her sillier and more innocent dialog for conciseness as her prattling could fill entire pages, and my visuals of her expressions and body language are all coming from my interpretation of her as a neglected/abused child being defensive because that is how she has survived.

In the end, they all act and react in very human ways even while serving their classic archetypical roles, which is what makes these characters so beautifully sympathetic and has garnered them so many fans over the years. You're well on your way to becoming one of them. :)

I'm having a lot of fun reading all of this, and I feel I get the full experience if I go through all of the comments too. :)

Since this is my first exposure to this world, I would say that I am seeing things from a different perspective compared to someone who has read all of the books and is familiar with Taran's and Eilonwy's story. I like both characters, and all of the emotions they are going through are portrayed really well in your pages. There's times where he'll say something or she'll say something that I think, "Oh, don't say that to her" or "Try not to be offended, he's not trying to hurt you." But they are kids thrown together in difficult circumstances which they've never experienced before, and they're muddling their way through it as best they can.

I've always liked stories about ordinary characters who find themselves in extraordinary circumstances. I like rooting for the underdog and seeing how they overcome the obstacles placed before them, and that's why I really like Taran at this point. He's in over his head, but I don't see him ever giving up.

When I read the Harry Potter books, as the series went on, Hermione became one of my favorite characters. I can see that happening with Eilonwy for me as this series progresses. I can already see a great strength in her, being able to overcome being kept as a prisoner for many years of her childhood as well as a great resourcefulness as she was able to free Taran and Fflewddur from the dungeon and get them out of the castle.

It's a great story.

Melyngar, like: "Keep it up, lad. At least my rider left you with one reasonable individual here ."