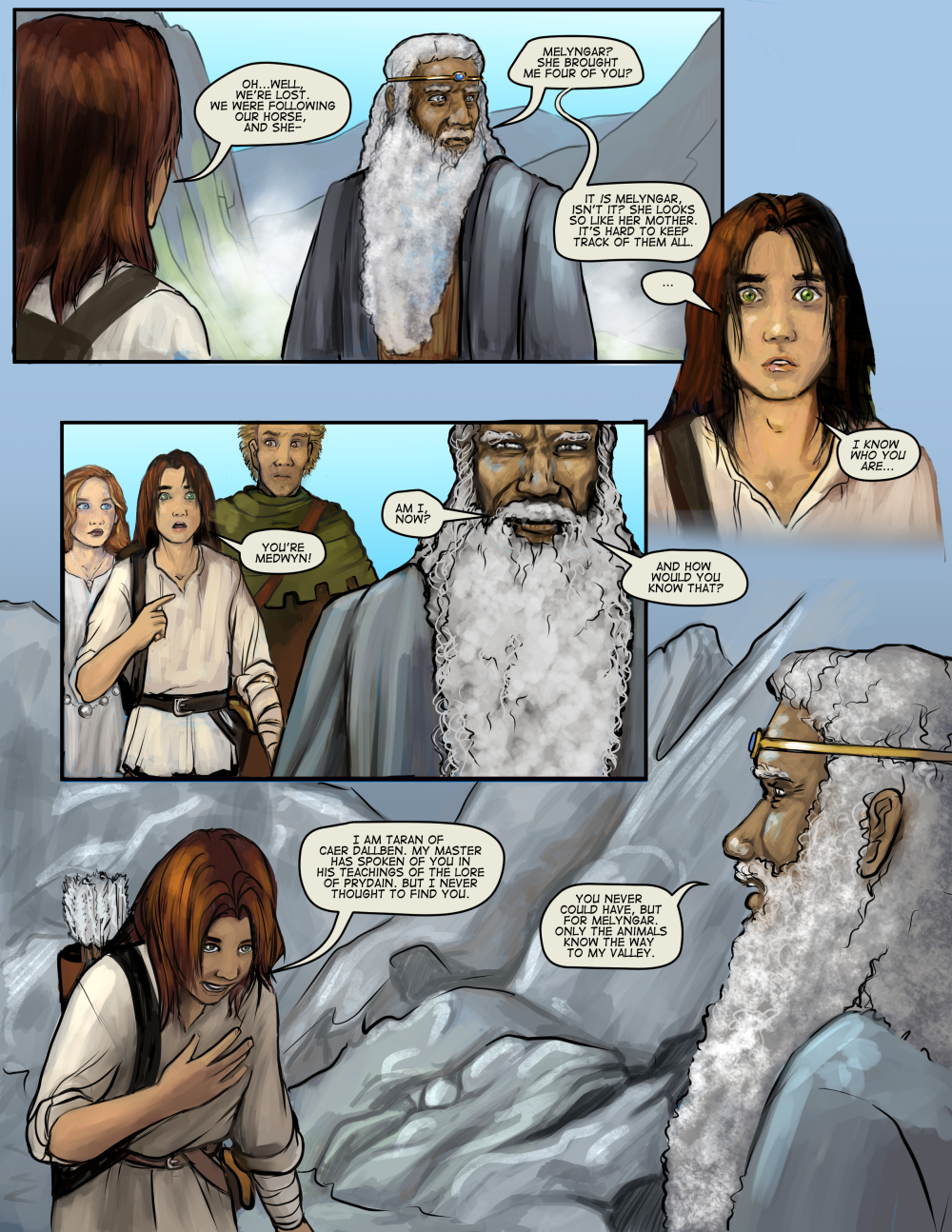 I'm baaaaack! Thanks for your patience everybody. Whew! Working for a living is satisfying but also kind of sucky when it leaves time for nothing else. :P

Let me pre-empt any purists by stating that yes, I have altered canon a little here in Taran's line because he initially hears about Medwyn from Gwydion, but I excised that conversation for efficiency back in Chapter Two, so needed a workaround. Medwyn seems like the kinda guy whose legend would get around the whole country so...

Psh, it's always true to the spirit of the books.

Look at that awkward little bow. Taran knows his manners and he's anxious to use them, but he's had so little occasion to practice. It's adorable.

He's not had a chance yet has he? Every meeting so far he's either been in shock or too overwhelmed for manners. Nice to see he has some. ;)

Lookin' forward to reading this again :)

Thanks man, it's good to be back in gear.

Great to have you back! I love Medwyn's little knowing half-smile in the second panel. It's been who-knows-how-long since his last human contact, and it must be nice to know people still remember him. (Of course, Taran later puts two and two together and comes up with another name for him, and Medwyn cuts him off pretty quickly then. He wants to be known, but only a little!)

Interesting, isn't it, his reluctance to ally himself with the legend? I wonder what that's all about! Like is it going to blow his cover or is it just "yeah, no, we don't have time for that story right now".

Or just Lloyd going "haha now speculate among yourselves."

Well, I finally finished The Book of Three for the first time.

I think I'm beginning to understand why people adore this book so much. It's such a hopeful tale, yet at the same time a bitter taste of life at its worst. Almost every character in this story has a very noticeable fault to their personality and I freaking love that! Makes it them all the more interesting and engaging.

Out of all the scene in this book that I love the most, it's the ones with this guy. Medywn.
Taran gets harshly criticized by almost everyone he meets and knows. Dallben, Gwydion, Eilonwy (holy crap! Haha! XD) etc. I mean I imagin he grew up being critized a lot and that's gotta be hard on someone as young as he is.

But Medywn is the only person that kind of feels like his uplifting him. Since he seems to know the innocence of animals, he easily understands the innocence of Taran and how much pressure is on him when tried to save Hen Wen AND warn Care Dathyl of the Horned King. And because of this, it makes it all the more heartbreaking when Taran choses to continue the journey instead of taking Medwyn's invitation to stay with him in the mountains with the animals. I mean, this is the same guy that said he does want man to know if him yet, but was so welcoming to Taran?... such great stuff here.

Man, it's been too long since I've picked up a book and spent the majority of my day focusing on it. Let alone begin talking about it afterwards with other people... I should do it more.

(Also, side note, the title of this book is called the Book of Three, yet the actaul book is only mentioned twice. I have my theroies about this, but anyways, RANDOM!).

I am so glad you read it! (I love that "for the first time" - does that mean it's going on your must re-read list?) And you've picked out some very insightful details. You're going to love the rest of the books moving forward. They get progressively more complex - the darks are even darker but it makes the hope shine out all the more brilliantly.

It's true, isn't it - Medwyn seems to see a side of Taran that nobody else does. I think Medwyn's gift of communication with animals gives him a very strong intuition and he's able to read who this kid truly is on the inside while everyone else just sees his foibles. It's a really lovely scene and it's always heartbreaking to me, too, that Taran has to give up the opportunity to stay in the valley, sacrificing the prospect of a peaceful, happy life for the hard duty and uncertain success of his quest. It's a heavy bit of foreshadowing, that...but I won't give too much away.

Feel free to chat over the books ANYTIME on any one of my venues - I'm always ready to talk Prydain. Can't wait to hear more from you (literally, if you are who I suspect you are, haha).

See, aside from always wanting to see if there's more gorgeous story, this is why I always check back here. Book analysis feeds my soul.

Flawed characters are always more engaging than perfect ones--this is why Gwydion, for example, is not nearly as engaging as OUR hero, for all we would still like to know more about him.

I'm not sure Medwyn sees a side of Taran that no one else does so much as Medwyn has a completely different approach. Everyone else in the Chronicles treats Taran like a man-in-training. They like him enormously, but they all have something to teach him.

Dallben and Coll have been parents and teachers, and they act like it. They have been primarily responsible for making sure Taran turns into a basically decent human being who has been basically educated on the things he will need to know. Thus, it is also their responsibility to curb his youthful stupidity, recklessness, and the temper he hasn't yet learned to control. We know they were good parental substitutes, however, because of how much Taran always misses them when he is away from home. They are strict, yes, but also loving.

Gwydion is Taran's mentor. Informally, yes, but he is the example Taran obviously uses for the entire series on how to meet danger and lead others. Again, it's his job to shape Taran, and if he criticizes him, he does it kindly and with the intention of turning him into a better man.

Eilonwy is a little different. I guess I've bought into the "part-of-the-reason-she-criticizes-him-is-'cause-she's-so-messed-up" theory, but part of her criticism does seem insincere or aimed to keep him at arm's length. The rest of it is because her function in the narrative (and in the medieval tradition) is to show Taran how to treat a lady. Specifically, his words should be kind (even if hers aren't) and he is to respect her opinions and her choices. In this capacity, her criticism serves the same function as the criticism of Taran's other teachers.

Medwyn, however, isn't one of Taran's teachers. He isn't trying to turn Taran into a man or a leader. His valley is, in fact, no place for men. He values Taran for the simplicity of his soul and the gentleness of his heart--the child and the animal in him rather than the man he is growing into. It is a beautiful part of every person, and more pronounced in Taran than in Eilonwy in BoT because of how they have both been raised, but in effect, Taran's choice to leave the valley is a choice to continue to grow rather than to simply stay what he is. I imagine Medwyn's Valley is incredibly peaceful--it is very healing to everyone to be allowed every now and then to just *be.* And some people, I imagine, find meaning in an entire life like that. But Taran has to climb.

Oh this is so, so good. No surprise coming from you, of course.

I admit I hadn’t looked at the Medwyn scene in this much depth, except insofar as it informed the related chapter in my fic - which, now that I think of it, actually touches on some of what you’re saying. That zen space of being in the moment is something I also picked up, and knew it wouldn’t gel with Taran’s general restlessness.

I know it’s not canon but I have this secret hope that somehow, toward the end of his life, he does find his way back there again.

I am not sure whether Dallben and Coll were such effective parental substitutes. They surely wished for all the best, and yet Taran spent his life with them like Captain Future on the moon with his three peers, and the old men have utterly failed to prepare him for the world beyond (girls, notably). In a way he has in common with Eilonwy that they have both lived in golden cages with extremely limited opportunities to socialize, and many of their troubles have emerged from that. Since Medwyn seems to be at least superficially familiar with Dallben, he may fathom the nature of the problem and grant a little bit of a helping hand in the following, like treating Dallben's stray foal that has come to harm, or Hen Wen. (Eilonwy may in fact be more of an enigma to Medwyn. While Taran wears his innocence like a flagpole, with her you cannot be so sure. I wonder whether he paid as much attention to her as he paid to Taran, and what was the result?)

Great page that certainly has sparked some great discussion! I never really read that much into this chapter of book before, so the last few posts here have certainly been enlightening. Glad to have you back!

Thanks! I'm glad to be back!

I just finished reading Book of Three to my son. He is ten, and is loving it. I deeply admire your technique in art and storytelling, but even more so your dedication to this project. Heartfelt applause from me, and thanks.

Thank you Aitch! It's good to hear there's a new generation of Prydain fans in the making. :) Thanks for commenting!

" Working for a living is satisfying but also kind of sucky when it leaves time for nothing else. :P"

Great page as always :)
I love to see how Taran changed his stance to be humble when he met Melyngar.

Turns out he does actually have manners when he has time to think about it!

It's a pity that our lovely princess is not on the last frame. Her expression that moment must have been like, "That's not the way to do a courteous bow, stupid!" Still, Taran tries his very best to emulate Gwydion's manners the way he imagines them, and it is sufficient to surprise them all. Maybe, if he had talked to Eilonwy like that ...