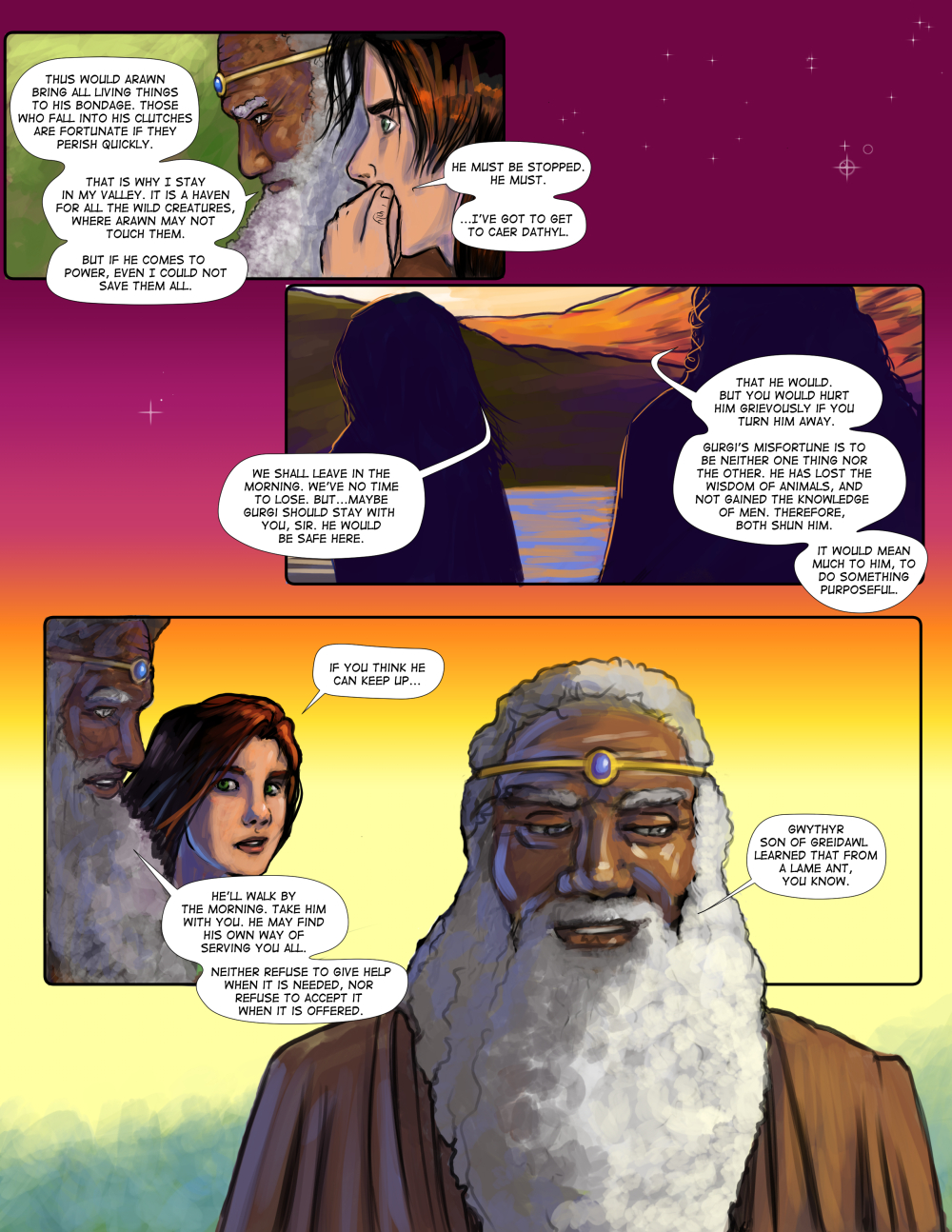 Now I wonder where Gurgi came from.

I like the stars in the purple night. And little Taran has me laughing at him again at his earnest efforts to be all heroic, determination to stop Arawn and protect Gurgi and all. He's a puppy who hasn't grown into his paws yet. But you always have to respect the intent, don't you?

Looking forward to both your interpretation of Medwyn's offer and Taran's upcoming mistake. :)

Ditto on the above comment. And again, gorgeous beautiful artwork!

Heh, all in good time, I’ve got Mabinogi to cover.

Wow, your color game is TIGHT.

Thank you! Sometimes I try to mute for various purposes but I always seem to come back to Maxfield Parrish level saturation in the end.

Yes it is a beautiful page! And I didn't know the story of the lame ant was actual Welsh mythology, very nice to learn that.

Translation: I do not want Gurgi here. Please, PLEASE take him with you.

You’re such a cynic!

Uhh...you have been reading his comic, right? ;)

It's a common trope in modern movies and TV shows though, so you can't blame him too much when he hasn't read the book. Besides, I think he's actually joking. He's notorious for that, or at least that's my story and I'm sticking to it. ;)

Lol indeed I have, for a couple years now. With great pleasure, mingled with unrelenting angst - so I do know he’s joking, and am sure he knows I am too. I would never dare to offend a fan as faithful as joeyb. God only knows what nightmare creature he would send my way. ;)

Hello, I was looking through the "Chronicles of Prydain" section of Tvtropes and found a link to your work.

This is really great stuff. I love your character designs and use of color. Your take on Gurgi is perfect.

I hope you keep going. I'm a parent as well, and these projects can be so hard to do with kids in the mix.

Most importantly: Your work has removed the sting of seeing the Disney version when it first came to theaters. Thank you so much!

Thank you for this! It’s my pleasure; my productivity has slowed lately but I have no intention of stopping! So glad you found it and took the time to comment - please keep checking in!

I just discovered this comic. Such beautiful beautiful work. I adore these books and I'm so glad to see them come life in this form. I give thee my humble gratitude!

You are most welcome! Glad to have a new fan around. There will be updates soon!

I just love how you did the panels! Your comic transcends story telling and dances with art.

A little flowery, but I've not had much sleep and these pages and their colors, styles, emotions are really just making me feel inspired :)

You can be flowery!! Flowery is good! What is this medium for if not to wed storytelling and art as harmoniously as we can?

Yikes. Does this boy not learn anything from the whole affair? He is at the verge of repeating the entire "Take this girl to her people" argument with Gurgi in the focus. True, this time his concern for the welfare and safety of another is genuine and not just parroting some courteous hero from some old book. Yet it might again be construed as wilful desertion, as Medwyn is quick to point out.

However, he supports his position in a manner that makes me hesitate whether he is really as wise as Taran thinks he is. In a nutshell, his argument winds down to valuing people by their usefulness. (And his use of serving in this context I find rather disturbing.) This may seem like sound advice under circumstances given - but a few days ago Taran conveyed exactly this to Eilonwy, and next thing he knew he had her at his throat for all she had heard was, "Thank you for being my henchgirl". You may argue that this was because Eilonwy is Eilonwy and her disturbed mental state not representing what Medwyn was aiming at. But he is not infallible despite all wisdom. So, does the old guy really fail to see that what some of Taran's companions are most deprived of is acknowledgement of who they are, not of what they can contribute to the mission?

I wonder whether he has talked to Eilonwy as well, and what came out of it.

(Sorry for expanding on this so extensively. I love doing text analysis on my favourite stories!)

Oh now that is an interesting observation. That's making me think.

I don't believe Medwyn is reducing Gurgi to the sum of his usefulness. His previous line about how Gurgi is in some strange limbo between man and beast, and shunned by both, is important here. All sentient creatures need purpose. We need to be needed by others, or we wither. This is, IMO, why selfish, lazy folks who never extend themselves for anyone else tend to be miserable, lonely, and unpleasant people (like Glew, to use an Alexanderish example).

Gurgi is canine in personality, and dogs are pack animals who particularly fit this concept. Each member has a purpose in a pack, a status in the pecking order and certain responsibilities to the others. Outliers are rejected and die alone in the wilderness. So it would, for him, be an even greater misery to have no pack and no purpose. It hits him down in his very instincts, and he senses, in Taran, a leader - the pack alpha, if you will - who won't reject him, who he can adore and practically worship, who he would literally die to save. A "good job" from Taran is the highest joy Gurgi could ever receive. Medwyn would be very aware of this. And perhaps Taran, later, when Gurgi finds Hen Wen and is so proud of himself, remembers this exchange, in wonderment.

The old man is speaking a profound truth even as his surface wisdom is "don't underestimate this creature". Even if Gurgi never did anything useful at all, his loyal heart and undying, sacrificial love of his companions is worth something. I think it's Taliesin in The High King who points out that Gurgi's form of wisdom is that of a "true and loyal heart" or something like that.

This reminds me a bit more of Gandalf's admonition to Frodo that Gollum might "still have some part to play". That's a much harder pill to swallow, given that Gollum never has anything but selfish and evil motives, yet the underlying message is "it's not up to you to decide whether someone else has value or not" and I think it is what's happening, in a more gentle and positive way, in this scene. It also underscores one of Alexander's themes that he comes back to again and again - there are no throwaway roles. Every single character he introduces, even in the sides, comes back eventually to do something important. Even Glew, arguably the most worthless individual in this world, finally has a defining moment where he does something for someone else and is indirectly responsible for returning the most valuable treasure to Prydain.

So Medwyn knows Taran's heart is in the right place, and respects that, but he's giving him a tip for the future as well.

Well, what has Gurgi done then before he met Taran and the other gang? I doubt that there has ever been a pack of Gurgis. What Gwydion said early-on about "He wants to be mean but cannot quite manage it" suggests a different early career. In a way he was as marred as Eilonwy but found his destiny once he could throw his loyalty at a worthy candidate, which she cannot (at this stage).

Or do you suggest thet Medwyn judges things from an "I know more about wolves than about humans" perspective? If he equated his visitors to a pack, with Taran as alpha and Fflewddur as scout and Gurgi as who-knows-what, then his advice made sense but he was in big trouble with explaining Eilonwy's fervent rejection of any such consignment.

I think Medwyn actually does think more like an animal than a human, actually. Witness his rather odd lapses of memory - he has to ask Melyngar’s name again because “there are so many of them” and later in The High King he cannot remember Taran’s name despite having been so impressed with him he invited him to stay there.

This, to me, marks a man who is not used to having to think or communicate in human words. I believe he exists totally in the moment, communing with his creatures, and at a fundamental level he understands the animal psyche far better than he does the human. He’s been in his valley so long he’s practically forgotten how to be a person. So he sees this little group of people in terms of a pack.

As for Gurgi we can only guess what he was doing before, but we know that he was largely lonely, cowardly, and wretched, and wanted to be fierce because, lacking any companionship or protection, that was how he felt safe and/or powerful. Meeting Taran is his first step toward becoming part of a family, to relating to other sentient beings in a meaningful and positive way, eventually becoming almost human in his relationships.